Read an article below about Sr. Barbara and Cabrini Ministries Swaziland, written by Roberta Salvador. This article was reprinted from the NYU Social Work Fall 2006/ Winter 2007 Alumni Newsletter. (Sr. Barbara received a Masters in Social Work from NYU in 1995.) The article is also available as a PDF online at: http://www.nyu.edu/socialwork/pdf/Fall2006Winter2007.pdf 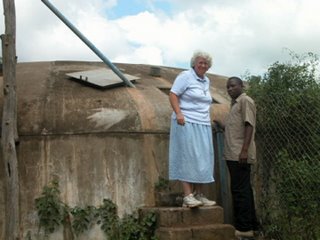 Providing Care in a Land of Crisis:
Swaziland Mission

Sr. Barbara Staley, MSC (MSW ’95), works hard to provide a holistic program of care for the 127 children at St. Philip’s Mission, a hostel for orphans in Swaziland.

The small African nation currently has the highest known rate of HIV infection among its adult population, at roughly 40 percent, and tuberculosis is also widespread. Sr. Barbara is witness to the heavy toll this crisis is taking on the region’s clan and family structures, leaving thousands orphaned. Sr. Barbara, a nun who is a member of the Missionaries of the Sacred Heart of Jesus (also known as the Cabrini Sisters), together with a staff of 16, provides health care, nutrition, and counseling for the hostel’s children. The Mission also pays the fees allowing them to attend school.

While the traditional family within the Swazi kingdom is polygamous, and children normally have several parent figures, the spread of HIV has strained the extended family support system. Staley said that she has “broken new ground” by working with heads of households within local chiefdoms, gaining social acceptance for the Mission as “co-parent,” caring for children with the permission of each orphan’s extended family. In order for a male child to keep his legal rights as a member of a tribal group, he needs to return to his homeland and extended family several times
a year; the Mission arranges those visits as well.

In a recent interview with the SSW Newsletter, Sr. Barbara said that she puts her clinical training to use every day since she arrived at the Mission in 2004. She credits her education at NYU with helping her understand cross-cultural sensitivities and commit to high standards in a challenging environment. “From a program point of view, we could pass any child program audit in the U.S.,” she said of St.Philip’s. Sharing the land with the hostel is a hospital that treats about 600 HIV-positive patients, including providing medicine, counseling, AIDS education, and meals. The Mission has recently acquired five hectares (about 10 acres) of land for the purpose of growing crops, to supplement the nutritional needs of the orphans and the hospital patients.

The quality of care at St.Phillip’s generates operating costs higher than other charity-run facilities in the region, said Sr.Barbara, noting that St. Philip’s spends an average of $1,200 annually for every child,compared to $100 per year/child at other missions. She also stressed that the need is increasing— although affordable generic medicines became available to Swazi patients in 2004, the rate of infection is still rising. There remains a powerful social stigma attached to acknowledging infection, she said. Under these circumstances, “you’re going to have more orphans.”

The Mission is entirely supported by individual donors. To learn more about the Cabrini Sisters’ work in Swaziland, go to www.cabrinifoundation.org.