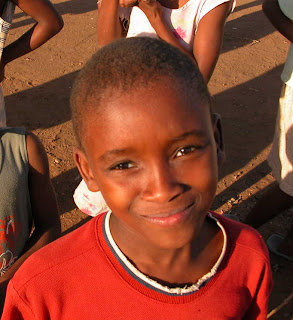 Lomtsimba is the youngest in a family of eight children. She has four older sisters that are also in the hostel, and three eldest brothers who are on their own with their wives. Lomtsimba is 11 years old and in grade 4.

Both Lomtsimba’s mother and father died in 2002, when she was six. Her mother had been sick for some time when she was hospitalized, and the cause of death was due to a faulty IV drip that exploded while she was being treated in the hospital. Her father worked for a sugarcane tycoon weeding the fields, and also made traditional shoes. He was well known and well liked by the community, and rode all over the area selling his handmade sandals. The cause of his death is unknown, but he was suffering hallucinations toward the end of his life. (We often hear of the childrens’ parents suffering hallucinations and emotional disturbances before an unknown death. Perhaps it is actually the dementia that is a very unfortunate symptom of late HIV or early AIDS that they are suffering. Fortunately, antiretrovirals, the medications for HIV/AIDS, can prevent dementia in HIV+ people.)

After her parents died, the girls had no adult guardians to go to, and were on their own. The eldest girl, Nobuhle (also now at the hostel), had to do all the cooking and watched over the family, at 13 years old. A neighbor kept seeing how the girls were, and he reported their situation to Sr. Anna Maria (who was here at Cabrini Ministries at the time). They have been in the hostel since 2002.

Lomtsimba is active and cooperative with her chores and loves singing and dancing. She is a member of the hostel junior choir and lead dancer of the Ummiso dance, which is a traditional Swazi dance for young girls, that involves stamping feet with ankle rattles and singing together. Lomtsimba even made up her own new song for the Ummiso dance.

She is also a member of the Kwaito dance group. Kwaito is like dance music or hip-hop in the US. It originated in South Africa and is a style that is expressed through music, dance, talk, and dress. Some Kwaito music is known for ‘telling it like it is,’ telling real stories of urban life that are sometimes very upfront. There are many Kwaito dances and the Kwaito group tries to collect and learn different ones.

Cabrini Ministries sponsors Lomtsimba for school (there is no public free education in Swaziland). She is doing OK. She is very good at crocheting and likes to make sweaters and scarves with her sisters in the crochet group. She’s a beautiful child and we’re very glad to have her and her sisters here with us.

Lomtsimba is the youngest, wearing the pink butterfly shirt 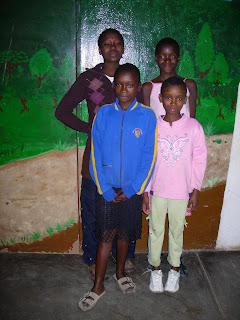