One of our goals at Cabrini Ministries is restoring life. We use this phrase often, because it captures both the literal and figurative meaning of the renewal and growth of livelihoods that we aim for.

Two of our staff members’ stories illustrate the cycle of “restoring life.” 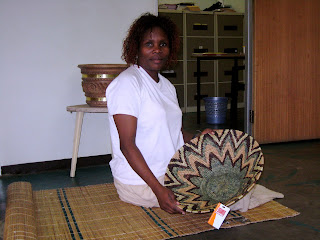 This is Phindele. When we first met Phindi, she was so emaciated and weak from HIV and TB that Sister Diane had to pick her up and carry her to the vehicle to receive care, even though Phindi was a young adult. She could not even receive HIV treatment at first, because her liver had shut-down. Phindele’s story was typical: she had left her rural homestead for work in an industrial part of Swaziland. She contracted HIV there, became ill, and returned to her homestead, as is usually the case, to die. 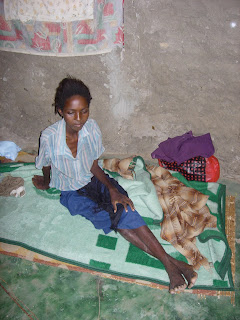 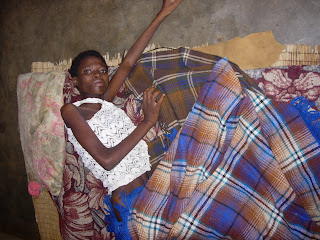 TB with HIV is killing so many of our people. These are photos of our patients from a recent slide show we did for the World Health Organization about the TB/HIV situation in Swaziland. Phindele looked like this once. Everyone thought she would die.

She was one of Cabrini Ministries’ first ARV patients, and she was treated for TB and HIV. She was lucky in that this was the time when ARV medications for HIV were first being distributed around the country in 2004. She has managed to gain back her health, and now lives a productive, normal life. She is able to raise her children, who would have been orphaned, and she can help her extended family.

Phindele is one of the many people we see that get a new lease on life thanks to medicine and care. Now, she works in our healthcare department, doing monitoring and evaluation, and she is a community educator, training other people in her community about prevention of HIV. Restoring life with treatment and care has been our focus, but we, with the rest of the country, must also support critical prevention activities, such as Phindele’s community education. 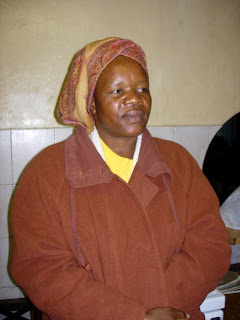 Tfobhi (pronounced “Tobi”) came to Cabrini when she was pregnant with twins and needed healthcare services. She got to know us as a patient, and began working with children in the hostel in 2006. She led the Weekend and Evening department, which managed such activities as study halls and tutoring, traditional games, crafts, sports, song and dance, and teaching life skills. She has shown great leadership abilities and now supervises all of the hostel staff.

She writes: “I have learned a lot. When I came here, I didn’t know that I had so many potential skills, or that I could do so many things. Through working, I can say that I can try- I don’t know if I’ll be able to do everything, but I will try. I’ve gained a lot. I learned a lot about children. I knew children, but I’ve learned that you can’t approach different children in the same way. Also, I was very, very shy in talking to people, but now I try to correct and teach people; now I talk, present and demonstrate.”

Tfobhi’s growing skills and confidence as a leader are particularly significant in the context of female status in this country. Before a new constitution was adopted in 2006 which granted some rights, Swazi women had the legal status of minors, and were unable to own property or open a bank account without the permission of a male relative or husband. Still, women in our community often won’t raise their eyes or speak up. Both Tfobhi and Phindele demonstrate great courage as managers and community educators, and are role models for our young girls.

These are photos of Tfobhi during the last Christmas event at the hostel.

There is a cycle and continuum that restoring life involves. Both Phindele and Tfobhi were once healthcare patients, as were or are many of the employees at Cabrini Ministries, and they are individuals who have so much to offer their communities. Healthy people can build healthy communities. We are grateful to all who help to restore the life to this community.